Laurent Vaucher the CEO of TeleVerbier has announced its COVID protection policy for the current winter, in line with may European resorts especially Austria. It come in 3 separate points:

TeleVerbier have obtained the ‘Clean and Safe’ label from Swiss Tourism. This means that are following the industry specific guidelines to make sure sanitisation and social distancing is followed.

Cableways are classified as public transport so follows the same regulations and buses and trains. This means that currently there is no lift/skier capacity restrictions but you will need to wear a mask in lifts and queues. It is not known yet if buffs or other types of face coverings are acceptable. This situations is caveated by any new measures or restrictions imposed by the governments. Let’s hope it doesn’t change. Click here for more information.

There will be a pro-rata reimbursement of your pass in the case of new government-imposed isolating measures, such as a quarantine, confinement, resort closure, etc. Click here for more information 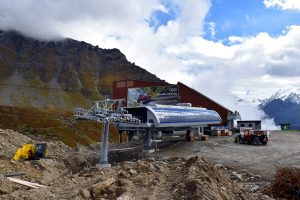 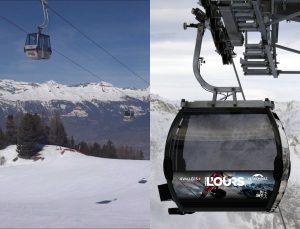 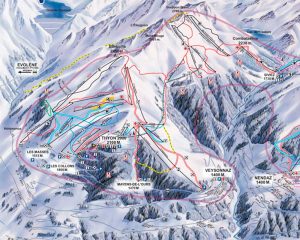 Even with the miserable weather we have been experiencing over the past month they are continuing with the Bruson lift installation. Certainly no arguing whether it is going to happen now!

This month Téléverbier published an update on the lift projects for the coming years. We all know that the Bruson lift project has started and will be ready for December 2013. There will also be more snow cannons on Le Rouge and Savoleyres areas. Although there is no real date for the replacement of the ageing Savoleyres lift they say the following

The proposed new facility for serving Savoleyres was submitted to the Federal Office of Transport for approval.

Given the complexity of the case, it is difficult to estimate the duration of the procedure. We hope that this groundbreaking lift, comprising a first section served by cabs and a second mixing section cabins and seats can be built in 2014.

We look forward already to be able to unite our main skiing areas.

Lets hope this is true..!

So, news just in is that Bruson goes ahead and work starts this week. Honestly.

The lift is going to get you from Verbier (Medran), down to Chable and up to the midstation at Bruson in less that 20 minutes – which is usually the time it takes to leave Medran and get on the bus if you’re heading to Bruson via Le Chable at the moment…

There’s a link to a little video (in French) by Canal 9 below – watch it even if you don’t speak french, the pictures are nice.

But it give us a little idea of what’s coming and what it’ll look like. According to the report building work starts today, and completion is for December 2013. And this time they mean it.

If you’ve never skied Bruson then frankly you haven’t lived, you can check out this post from a massive powder day last year…

(And if you want to see what the new lifts will look like, either click here or you can pop up to Medran where there’s a cabin on the roof. Yes. On the roof).